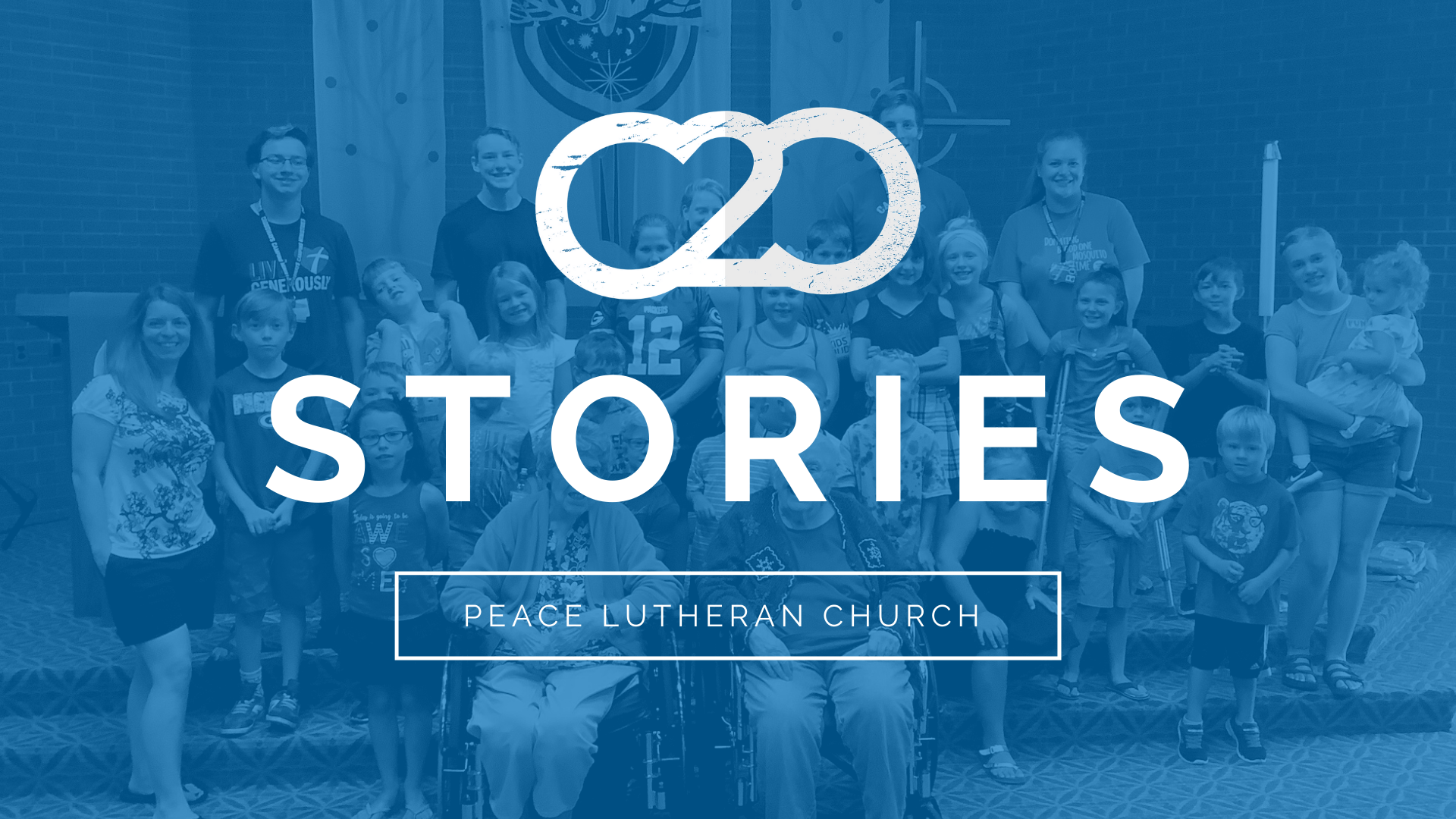 “Bingo!” a young voice sounded out.

The young boy was paired with an elderly woman who was unable to speak up loudly enough to be heard from across the room, but she clearly shared his excitement and enthusiasm on their fourth bingo in as many rounds. A runner dashed from the front of the brightly lit common area to deliver their reward: a shiny quarter. The runners were the youngest campers, who not only had trouble sitting still but also were still learning their letters and numbers. Shuttling the prize money was the perfect job for them. The kids and residents became fast friends, learning a little about each other and joining together in the excitement of the game. One little boy was a bit in awe of his partner when he discovered that he had served in World War II.

I was with the day campers from Peace Lutheran Church in Oshkosh, WI, and we were accompanied by three summer camp staff from Crossways Camping Ministries. We had traveled via public bus across town to the local nursing home for an afternoon of games and fellowship with the residents, two of whom were church members. Our fellow bus riders brightened at the sight of two dozen young children packed into the bus during a normally quiet time on public transit. Nicki McKnight, the Curator of Children’s and Youth Ministry at Peace Lutheran, explained that it was not only less expensive to ride public transit than to rent a private bus, but it also gave them a chance to engage the community. Sure enough, conversations sprang up between our group members and the other riders, with topics always including Peace Lutheran Church.

“Our mission is kindness and generosity,” Nicki told the group conspiratorially upon our arrival. “Let’s live our mission today.”

These were not just day camp participants, you see. They were secret agents. The Bible study theme for day camp was Agents of Change, a theme used in all of the Crossways day camps and many other Lutheran camps across the country. Nicki had taken this theme and run with it. Each camper’s name tag identified them as a secret agent, and their small group names were spy-themed: “Mission Impossible,” “The Odd Squad,” and “Operation Stormbreaker.” Campers were encouraged to memorize the theme verse for the week (Romans 12:2), and when they were able to recite it, they received a secret agent spy kit. They even had a secret mission of making Rice Krispies treats to surprise the nursing home residents, and each child had a role in the preparation, all under the watchful eyes of Nicki and the Crossways staff members.

On the bus ride back to the church, the young boy whose partner had gotten the four Bingos clutched has hand tightly. “What do you have there?” I asked. He opened his hand and proudly revealed a single quarter. He explained that his new friend at the nursing home had given him one to take home, since they were a team. I smiled, marveling at how well the youngest generations are able to bond with the oldest.

It was Nicki’s first year in her leadership role at Peace Lutheran, and she entered the week of day camp expecting a Vacation Bible School (VBS) experience similar to her friend from an area church, who led VBS using the popular Group Publishing curriculum. The day camp at Peace was even advertised as VBS. Nicki said that no matter how many times the church’s pastor (Pastor Brad) and the full-time staff at Crossways told her that day camp was different, she did not understand the difference until the Crossways staff arrived. “They had everything ready to go,” she said appreciatively. The staff came with Bible study curriculum, camp games, engaging songs, skits, and (from Nicki’s perspective) a willingness to go beyond what was required of them.

Nicki was prepared for young adults who did the bare minimum by leading 2-3 hours of programming and then going on break for the rest of the day. What she got were 3 highly trained and talented camp staff members with a passion for sharing their faith with young children and a genuine love for congregational ministry. Even though Nicki understood that they didn’t have to be there, the camp staff helped keep the group together on public transit to the nursing home, safe while cooking the treats in the church’s industrial kitchen, and engaged in fun activities during unexpected down time. Through it all, they continued building relationships with the children. Each had very positive childhood experiences in the church, and one even recalled an experience as a young camper with Crossways day camp that had a tremendous impact on his life. He never went to overnight camp. His experience at day camp in his home church was a catalyst for his growth in faith and the primary reason he sought out employment at camp as a way to share his faith with others.

Pastor Brad understands the power of day camp. He served as a Lutheran summer camp counselor in college and had experienced traveling day camp at other churches he served. Camp was an integral part of his call story. He has seen day camp serve as an entrée for overnight camp and an effective way of engaging the community. He showed up at camp each day and did not hide his enthusiasm. As I spoke with him, he had a rainbow painted prominently on his forehead from the carnival that the Crossways staff had led earlier that day.

Nicki’s misunderstanding about the differences between VBS and day camp turned out to give added value to the program at Peace Lutheran. The kids enjoyed the spy theme. It also gave greater structure and a novel creativity to the program that the Crossways staff had been leading over and over throughout the summer. It demonstrated to me as a researcher that an engaged and creative church coordinator, combined with quality day camp staff, can produce a dynamic camp program that is in many ways superior to programs in which church leaders step back and expect the camp staff to take care of everything. It was wonderful to see the campers and camp staff engaging the congregation and the wider community.

The moment of greatest clarity that we were at day camp and not VBS was on Wednesday evening. The community was invited for a campfire worship service. Parents, grandparents, and friends of the congregation gathered around the campfire in the church lawn, and the Crossways staff led the group in camp songs and prayer. Passing drivers slowed to observe the spectacle. The aforementioned staff member, whose life had been dramatically impacted at day camp, gave the message, based on the Bible study passage for the day. Children snuggled in with their loved ones as a cool breeze blew through the assembly. Then they leapt to their feet when the guitar came out and they had the chance to sing along with the favorite from the week: “I just wanna be a sheep.”

After worship, everyone had the chance to make a s’more. I jumped in beside Pastor Brad (still sporting the rainbow face paint), Nicki, the young adult Crossways staff, parents, and grandparents in coaching the younger generation on tricks of melting the chocolate and the subtleties of roasting a marshmallow to a perfect golden brown. Most of the marshmallows ended up aflame, whether out of impatience or fascination with fire, but it was beautiful to see the generations mixing together in this time and space.

Engaged in scripture and connected to their church community, the young campers at Peace Lutheran day camp were learning to be agents of change in the world.

← Strength to the Weary: Day Camp at The Chapel Using Data to Empower →