He was not quite in a panic, but there was clear concern in his voice when my brother called on Sunday afternoon. He had just dropped off my niece for her first week ever of summer camp at Bethel Horizons near Madison, WI. He had met the director and had a nice conversation, during which he learned that his daughter was one of only 12 campers going to camp that week. What should he do? He had envisioned a large group of energetic young people gathered around the campfire singing songs. 12 simply was not critical mass. He wanted his daughter to have a great experience, and he was worried that such a small number of campers would be disappointing for her. He did not want her to have a lousy first ever week of camp. She might never want to go again. Should he pick her up and bring her home?
My brother is not alone in thinking that a positive camp experience is dependent, in part, on the excitement and energy generated by large numbers of people. I spoke with a pastoral colleague (and passionate camp supporter) later in the week and told him about the low camper number. “What do you do with 12 campers?” he wondered.
My response was the same to both of them. I told them that the week had the potential to be a singularly amazing experience. I have long been convinced that the power of the camp experience is found in personal relationships formed as part of a small-group experience (see previous post). The small number of campers could facilitate personal encounters among all of the campers and summer staff members in ways not possible when there were over 100 campers present and the staff was stretched thin. 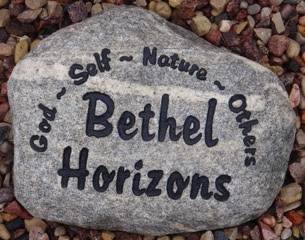 In the case of Bethel Horizons, my conviction that my niece would have a positive experience was not simply theoretical. I have led staff training sessions and college classes on their site. More importantly, I know their staff, and I think they are top-notch. I was confident that they had hired good summer staff members. I started imagining some of the possibilities that excellent summer staff members might come up with for a small group of campers. I smiled. It was going to be a good week, I assured my brother.
He sent me a text on Friday: “FYI just picked her up after her camp week. She had so much fun she wants to go back for another week this summer.”
Those of you who have picked up a child after camp know how those conversations go. My niece spoke on and on about how much fun she had. She made a great new friend, and they had exchanged contact information. She loved her counselor and the staff. She got to do tons of hiking, the high ropes course, and rappelling off a cliff. She sang songs about God and learned new table graces.
The summer camp experience is not about big numbers or epic large-group games. It is about people and relationships. My niece formed positive relationships with other campers and adult mentors. She did this in a loving environment framed with Christian faith practices. As an uncle, I am thankful for another great camp experience! I am thankful for the people of Bethel Horizons. Their numbers may be down, but they remain one of our great summer camps. Learn more about them HERE!

There is still room. Have you signed up your child for summer camp???

← Creating Safe Spaces This Negative Summer Could Use a Dose of Camp! →