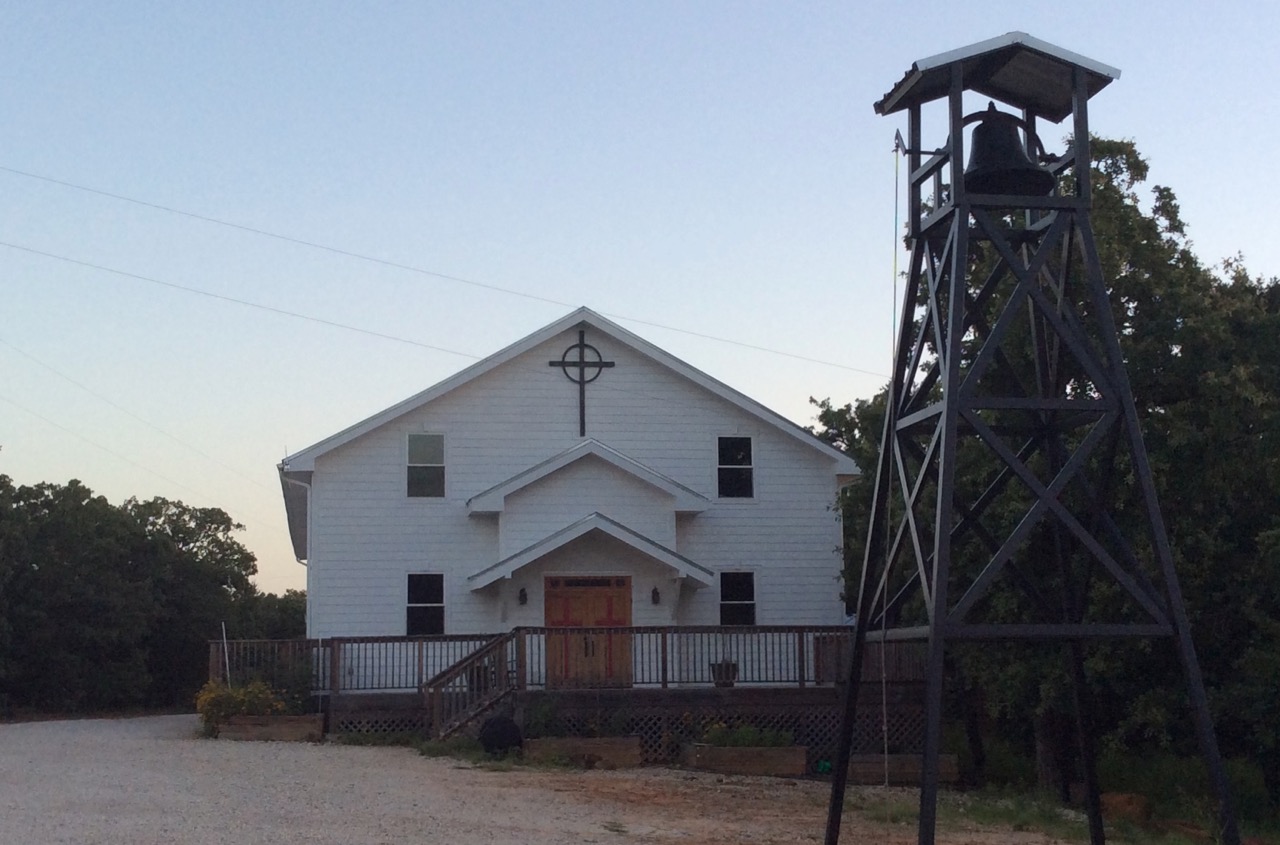 It Is Well With My Soul: Camp All Saints

“Remember, this is for Jesus.”
I paused to consider this declaration. I suppose it is true, I thought, in some eschatological sense. Still, the declaration was a little jarring. The campers were getting antsy. Was the staff member just saying it to keep them quiet, or was there actually some truth in it?
We were inside the beautiful white chapel at Camp All Saints, just north of Dallas, Texas. The chapel was gorgeous: a church building, in actuality, that had been relocated to the camp instead of being torn down. It stood like a sentinel on top of a hill in the center of camp. The camp sprawled in all directions, hugging the shoreline of Lake Texoma, which was a staggering 20 feet above normal levels after a series of torrential rains hit northern Texas in May and June. The boating dock had floated away, the archery range was relocated to higher ground, and the low ropes course was under water, but camp was on amidst the chaos! Inside the chapel, there was no sign of this chaos or the general chaos you might expect to find at summer camp, and the near-100 degree heat was shut outside, as well. It was practically orderly, I thought with a chuckle. “Shhhhh!” Okay, now it was orderly.
64 summer campers, many of them elementary age, were arranged like a choir in front of condenser microphones, and the college-age summer staff members were desperately trying to keep them under control, focused, and on beat. This was no easy task. We had already traipsed through the sticky heat to the campfire ring – not to have s’mores or even to light a campfire, mind you, but rather to gather in neat concentric circles around the unlit fire pit so that the staff could get video of us cheerfully singing (“No zombie faces!”). Then we marched back to the chapel building to record the audio.
We were on take 4.
The song was “It Is Well,” and the campers were only singing verse 2 and the chorus. The recording would be blended with campers from the other weeks of camp singing the other 3 verses, thus the need for order and precision. Exasperation and frustration were apparent. How long was this going to take? How long could the campers stand in one place? Could they still sing pretty when they were so antsy? It all felt a little canned to me. Everything had to bejust so. Was it really for Jesus, as the staff member had assured the campers? 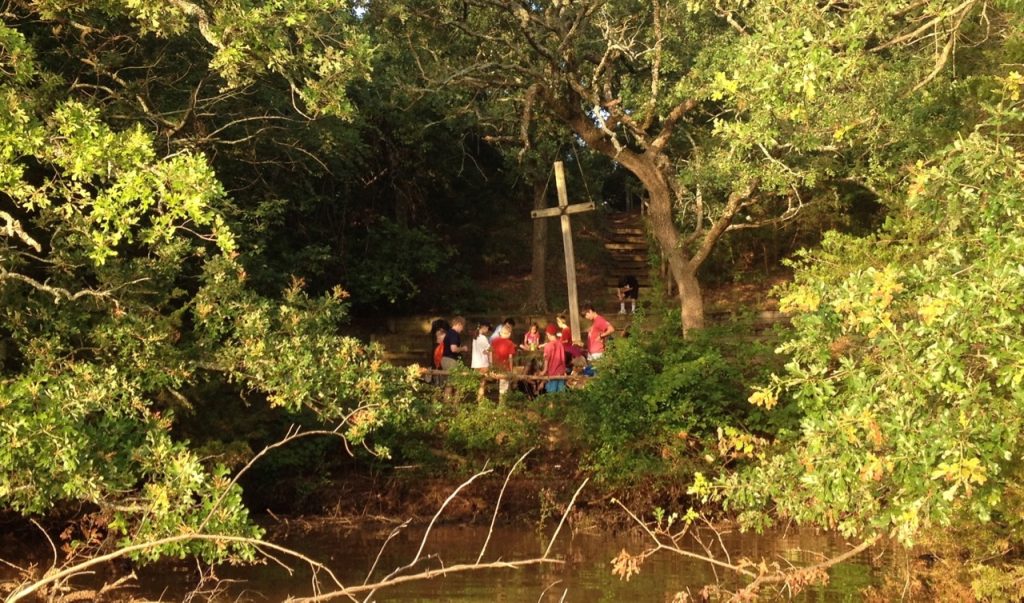 Sunrise Activities by the Lake

I thought back to that morning. We had been singing the exact same song in that very chapel, but there were no microphones, choir director, or frustrated shushing. There is a worship service every morning at Camp All Saints. Priests wearing stoles over their camp scrubs lead the liturgy and preside over the sacrament (complete with the little tinkly bells). But the singing…oh, the singing! It carried me away that morning. It was the fourth day of camp, and campers were really getting to know the songs. Besides that, I was starting to feel like part of the community, and I was getting to know many of the campers and the staff. I had kayaked with some of them on the lake early that morning, the water, smooth as glass, reflecting the sunrise. We were literally paddling among the treetops (due to the high water). I had also played some games, shared in meals, and had great conversations with many of them. There is something holy about worshiping with a community in which you feel welcome and loved. “It Is Well” gave me goosebumps that morning. Thatwas for Jesus, I thought. Was this?
“We should have recorded that,” lamented the priest sitting next to me. We were in agreement: this structured recording session simply wasn’t the same. Verse 2 over and over again: “Though Satan should buffet…” Satan has been buffeting long enough. Can’t we move on to verse 3? No, that’s for next week.
And then I felt the connection – not just the connection with my fellow Christians in that space but connection with the campers of the previous week who sang verse 1 and with the campers in the next two weeks who would sing verses 3 and 4. We were continuing a song already in progress, and others would not only pick up where we left off but also join us in the chorus. It was an offering, an offering that connected us through time and space with other believers. It was an offering lifted up with other believers for the sake of the church, the body of Christ. He’s right, I thought.
“…and hath shed his own blood for my soul.”
I looked around at the campers. Did they get it? Did they have a theological breakthrough like mine? Probably not, I mused. But they were connected, nonetheless. That staff member, whether he was simply trying to get one more good take out of them or he really believed it, offered a theological interpretation.
I thought back to my conversations with campers earlier that day. Christian faith and teachings were present in all parts of camp life, they told me. Sure, the day was framed by morning prayer before breakfast, morning worship in the chapel, deans time (a more formal Christian education time with the visiting clergy), and the service of Compline each night in the cabins, but it was more than that, the campers told me. Even the games and activities were about God. Kayaking? High ropes? Cliff jumping into the flooded lake? All became Christian activities at Camp All Saints, according to the campers.
How do I describe the experience at All Saints for those who were not there? I have to put it in a can, too. We start here, in 1500 words or less. Their video project will surely do the experience more justice, and I can’t wait to see it. Last year’s was great (check it out here!), but this year’s will be much more meaningful because I was a part of it. We were connected to campers in other weeks, as well as to the whole diocese, to which the video was primarily directed. But we were also connected to the whole church. The campers sent video greetings to the national assembly, which was currently underway in Salt Lake City (check it out!). They were, in fact, praying for their church as they elected their first African-American presiding bishop that Saturday.
“Shhhh!” Silence slowly fell as the staff member with the headphones nodded in confirmation: “We’ve got it!” There was an outbreak of applause and cheering. Then they broke into a new song, almost spontaneously. It was like their bonds had burst, so great was their enthusiasm. They sang their hearts out to their camp favorites. Some danced by the altar, while one boy beat out the rhythm on a church pew and another started breakdancing in the aisle. Song after song, their energy and enthusiasm poured out. The priests and staff members could only smile and join in or frantically try to document this outpouring of the Spirit with pictures and videos. But these will never do it justice. You had to be there. To experience it for yourself. To see and hear the campers joyfully singing, “You are alive in us, nothing can take your place. You are all we need, your love has set us free!” They looked free. They looked caught up in the Spirit.
There are multiple forces at work at Camp All Saints. Some are forces of structure and order, passed down in unbroken succession in the Episcopal tradition. But there is freedom within this structure, maybe even freedom that grates against the structure itself. Above all is the sense of community and belonging, carefully nurtured through shared experiences and intentional models of forgiveness and reconciliation when there is conflict. 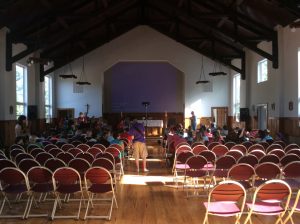 Gathering for Worship in the Chapel

“What is the most important thing for these campers to take home with them?” I asked the staff. “You are loved,” one replied. The campers probably will not remember the names of all the saints they talked about during deans time, but they will remember that they are loved. They will remember that they are a valued part of a believing community. They may even make the connection that the community extends far beyond the boundaries of their camp experience, more than we can say for many of our churches’ Sunday morning worshipers.

More than likely, the campers will be dissuaded from breakdancing in the aisles or dancing around the altar when they return to their home congregations. One of the priests lamented the disconnect between camp and congregation, especially in a traditionally conservative area like the Diocese of Dallas. But there is something powerful happening at Camp All Saints, and the Holy Spirit is active in the midst of it. If there is a disconnect, church leadership can work hard to “bridge the gap,” as one priest suggested. Campers are believing that they are loved, that they are valued members of the Christian community. The young people actually think that faith has relevance to their lives. They do not sit bored and disengaged but rather stand and sing with passion and assurance:

This post reflects on a portion of a study conducted as part of the Confirmation Project. Learn more about this exciting project, which includes 5 denominations HERE!
← Like a Zipline through a Sanctuary Taking Selfies...Together: Confirmation Camp at Lake Tahoe →