What is Camp? Part IV: Partner in Ministry

Christian camping is about ministry. Previous posts in this series have emphasized that camp is much more than fun and games. Camps are centers of faith formation. The ministry at camp focuses on meeting participants where they are in their faith journey and accompanying them through unique experiences.
But the ministry at camp does not stand on its own. Camping ministers have widely acknowledged this because of the nature of camping ministry as temporary. The fact that the experience has a set beginning and end heightens the awareness that participants have left something behind to which they will eventually have to return. It is this temporary nature that allows camping ministers to understand that they are partners in ministry, particularly with families, colleges, and congregations.
Partnership is an important concept in ministry. Congregations are sometimes seen as the centers of faith life, with other ministries subservient. This relationship is not a partnership. A partnership does not necessarily entail an equal relationship, but it does imply a mutual dependence. Congregations are not stand-alone ministries, and ministry professionals are increasingly acknowledging this. There is widespread recognition that the home is the epicenter of faith formation and that congregations are partners in ministry with the home. Camps should be seen as another partnership ministry that shares a mutual dependence with the ministry of the home, the ministry of the congregation, and other related ministries (among them, campus ministries). Camps are not expendable. Congregations and families depend on them as ministry partners.
The initial survey of the Outdoor Ministry Research Project shows that there is widespread recognition in Mainline Protestant camping that camp is a ministry partner. It is interesting to note that there is also evidence that the partnership is strained in some cases.
78% of camp directors “moderately agree” or “strongly agree” with the statement, “Camp worship/programs are designed to get campers more excited about and engaged in their home congregation.” This item shows that there is intentionality in the camp programming with regard to partnering with congregations.
Directors were also asked to indicate the importance that their camp places on the items “Strengthen/support congregations” and “Strengthen/support families.” 74% indicated that “Strengthen/support families” is “very” or “extremely important,” and 58% indicated the same for “Strengthen/support congregations.” These numbers indicate that there is widespread recognition that camp serves an important role with respect to strengthening families. The comparatively lower number for congregations deserves closer attention.
The importance placed on “strengthen/support congregations” is sharply divided along denominational lines. On the high end, 78% of Lutheran (ELCA) camps indicate that this item is “very” or “extremely important.” However, less than half of both the Episcopal and Presbyterian (PC-USA) camps say the same (43% and 48%, respectively). Methodist (UMC) camps come in at the average (59%). These numbers raise serious concerns about how camping ministry is seen in certain faith traditions.
Clergy involvement also varies among denominational traditions. Significantly higher percentages of ELCA and UMC camps report “Many congregational leaders/clergy are heavily involved in the ministries of the camp” compared with the other traditions. Significantly fewer PCUSA camps report high clergy involvement than non-PCUSA camps.
The difference is also reflected in the camps’ evaluation techniques. Consistently across the denominations, about 50% of camps say that they survey parents “asking them to evaluate the experience of their children.” However, camps were also asked if they “survey clergy or other congregational leaders asking them to evaluate the programs.” While 54% of ELCA camps indicated that they survey clergy, only 25% of Episcopal, 22% of UMC, and 19% of Presbyterian camps indicated the same.
Taken together, these numbers suggest that there is a widespread recognition in the ELCA that camp is an important ministry partner with both congregations and families. The recognition of the partnership with congregations is in doubt in other traditions, most notably in the PC-USA.
These mixed results reflect a developing crisis in Christian camping ministry (see previous post). A deterioration of partnerships reflects problems in the ministry ecology of a faith tradition. If camping ministry is devalued, clergy and congregational leaders pull away from the ministry, and camping leaders may respond by also pulling away. 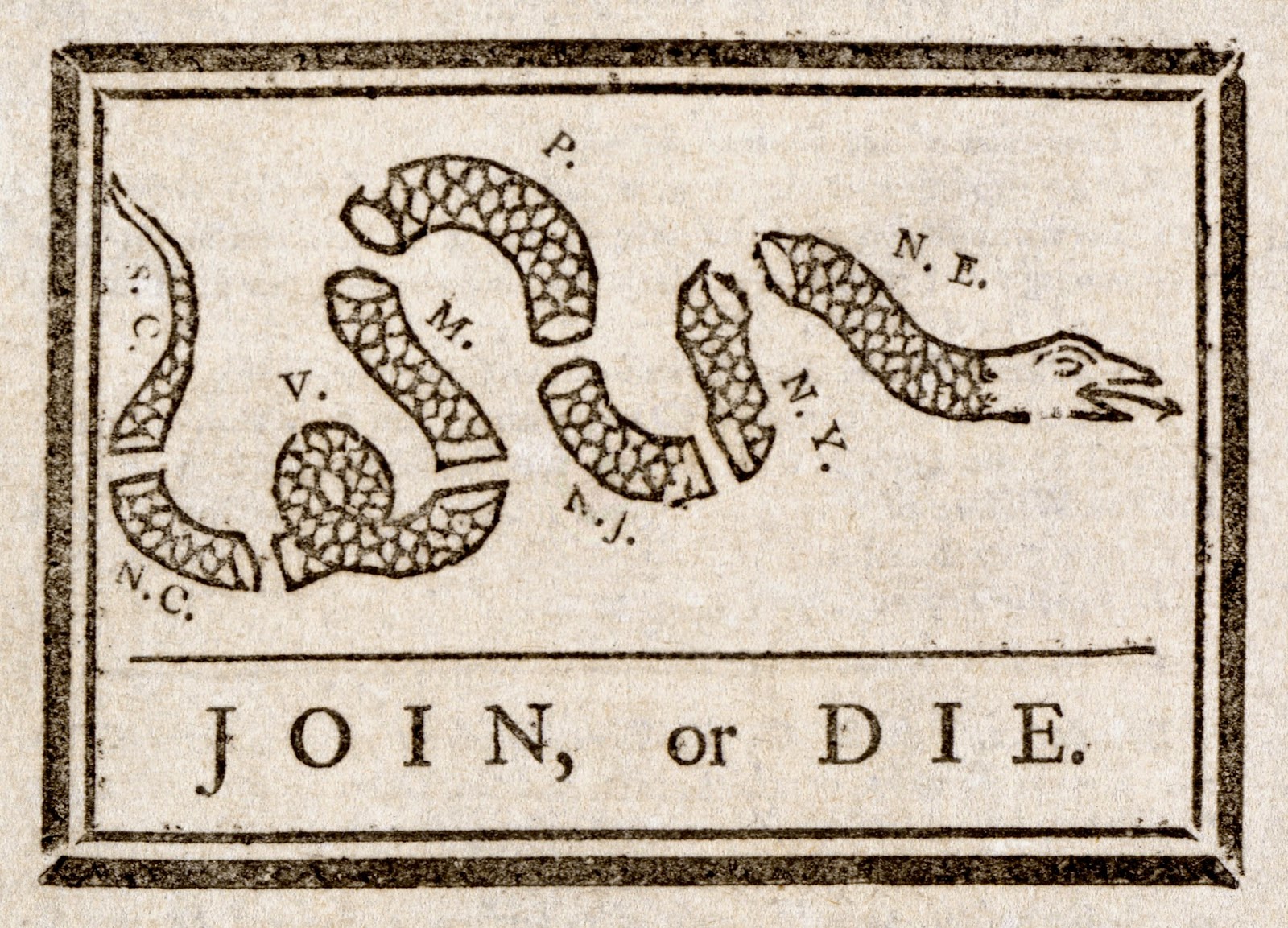 The issue is not survival. This is not a “Join or Die” scenario. Congregations were around long before camping ministry became widespread in Mainline traditions in the 1940s and 50s. Congregations are not going away if camps die. Likewise, camps find ways to survive without congregational support. Comparing the camps in the survey that showed evidence of strong ties to their denominational traditions/teachings with those that showed weak ties, there is no significant difference in their 2014 camper enrollment capacity or enrollment trends. There is no evidence that strong congregational ties save camps from financial ruin. On the contrary, some camps may shy away from tying themselves to the sinking ship of their denomination. If both camps and congregations die, the Holy Spirit will enliven another expression of church. It is not a survival issue.
It is a ministry issue. We are stronger together, and we can minister more effectively with young people and families if we recognize the importance of partnership. Congregations do not need camps, and camps do not need congregations. But the Church needs both. God is at work in both. Isn’t that reason enough to strengthen our partnerships?
← What is Camp? Part III: Center of Faith Formation What is Camp? Part V: Small Group Ministry →