Christian camps across the country are facing tremendous challenges. I continue talking with camps that face serious financial problems, have cut back staff to save money, and are even selling property or considering closing altogether. For the majority of camps that I talk with (most of them Lutheran), summer camper numbers have been in steady decline for the past 5-10 years. While some challenges are uniquely Lutheran, the general decline in summer camp attendance among Christian camps seems to be ubiquitous. The traditional ways of dealing with a decline in numbers are no longer functioning because of tremendous cultural shifts that are changing the role of outdoor ministries in the Church. Consequently, an innovative new program is not enough to curb the decline. Sending the director out to preach at all the area churches is not going to “fix” the problem. These and other strategies may help to slow the decline, but now is the time for a radical reimagining rather than traditional strategies. Here’s why:
Financial Collapse:
The financial collapse of 2008-2009 came at an incredibly inopportune time. Through the ’90s and early ‘00s, camps were steadily increasing in camper numbers and capacity. Full-time executive directors began hiring full-time program directors, and camps recognized the importance of offering year-round ministries. Many mainline camps saw their summer camp numbers peak somewhere around 2000-2002. Building projects, land acquisitions, and staffing expansions during those boom years resulted in debt loads that became unsustainable through an economic collapse. While camps across the country saw dramatic decline in numbers during the economic downturn, most saw a rebound in 2010-2011. Many mainline camps have not seen the same rebound. 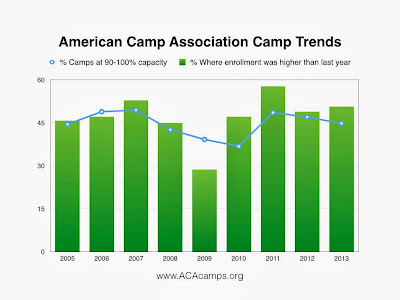 Religious Decline:
Mainline Protestant denominations have been in steady decline for the last two decades. My own denomination, the Evangelical Lutheran Church in America (ELCA) exhibited a slow decline through the ‘90s and then the loss increased through the ‘00s, culminating in a mass-exodus in 2009-2010, following a change in church policy. The ELCA has lost more than 20% of its baptized membership in the past 10 years. Other denominations are suffering similar declines. The Pew Research General Social Surveys marked a milestone in 2012 as those classified as “Protestant” in the USA fell below 50% for the first time in history. Unfortunately, dramatic declines in mainline denominations have hampered the camper number recovery seen in non-Christian camps around the country during the economic recovery. Evangelical Protestants, who have long derided the mainline’s decline as divine judgment, are now also declining steadily. Their conservative stances may have helped them pick up some disaffected mainliners and slowed the inevitable, but their numbers are now shrinking rapidly. Rather than switching denominations, many people (predominantly younger people) are leaving the church altogether. The so-called “nones” (those professing no religious affiliation) now represent 1 in 5 Americans. 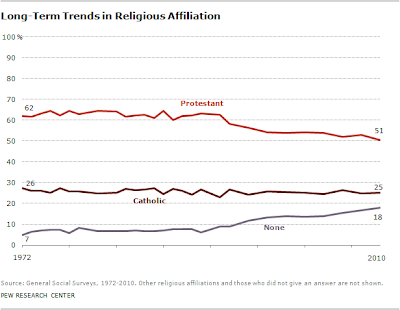 From Congregational Outpost to Hub of Evangelism
With less Christians in the churches, camps that are so dependent on congregational ministry will decline along with their denominations. For years, mainline camps have been “support sites”  or “outposts” for congregations. In fact, this is how many of them were founded, and they continue to operate with “member” congregations and expectations that the camp is there to support the ministry of specific churches. Putting camp announcements in church bulletins and singing camp songs at Sunday school worked great when there were people in the pews. As Outdoor Ministry has evolved, camps have expanded their ministries and now face critical decisions of whether to remain primarily “outposts” for declining congregations (which can only lead to financial ruin) or re-envision their role in the Church, which has the potential to alienate some of their strongest congregational supporters (leading to financial ruin). Evangelical camps that are not as dependent on congregations will fare much better and are in a position to serve as hubs of evangelism (especially to the “nones”), leading young people and adults from camp into lives of discipleship that include participation in worship communities. Tragically, the close ties of mainline camps to their denominations, which for so many years have been mutually beneficial, may lead to the closure of some of the most exemplary outdoor ministry sites in the country.
Changing Demographics:
While camps are providing more and more programming for adults and families, the primary constituency is still children. According to US census data, the child population grew 3% from 2000-2010. Initially, this sounds encouraging. However, this growth is down from 13% in the ‘90s, and growth in child population is exclusively in minority populations. In fact, the number of non-Hispanic white children decreased 10% in 2000-2010. This is where camp needs to face up to a difficult and tragic reality: camp is largely a middle class, white phenomenon. Data from the National Study of Youth and Religion (1) reveal that white children are almost twice as likely to attend a religious camp than non-white children. Middle class kids are 1.7 times more likely to attend than low income kids and 1.2 times more likely than higher income kids. After the economic collapse, the wealth gap has increased dramatically. With less middle class children and less white children, Christian camping as we know it will continue to decline. As much as camps pride themselves on diversity, we need to do much better!
Crisis of Identity:
With so many changes in the economy, national religious climate, demographics, and parent denominations, many camps are struggling to survive under a model that no longer exists. Amidst all of the changes, there are tremendous opportunities. The number of non-profits has exploded (up 25% from 2001-2011, according to Urban Institute), meaning increased opportunities for partnerships. People give $316 billion to charitable organizations (2% of GDP)! Young people are passionate about service and social justice. The larger society and the Church in particular need camp now more than ever. In an age of faceless encounters, we need places of genuine encounter with the other. In an age of increasing suspicion of institutionalized religion and professional clergy, we need ecumenical enclaves of theological dialogue and play focused on lay ministry. In an age of “nature-deficit disorder,” we need places for people to experience and reflect on the importance of God’s creation. The Church needs camp. The problem is that churches do not necessarily see the need. One of the most interesting things about the so-called “nones” is that only 12% of them are atheists (Pew Research). In fact, 68% say that they believe in God! They simply have no use for organized religion, indicating that congregations and denominations are no longer entry points for people into lives of faith. Outdoor ministry sites may offer an alternative. Interestingly, 58% of “nones” say they feel a deep spiritual connection with nature. Christian Outdoor Ministry sites are fertile fields for faith formation and openness to the Holy Spirit moving in new and unexpected ways. Camps need to get over their crisis of identity and follow the movement of the Spirit to their roles as leaders of a new Christian awakening. This will not look like the old model of doing camp. In fact, I’m not sure what it will look like. That is why following the movement of the Spirit is both exciting and scary.
(1) The National Study of Youth and Religion, www.youthandreligion.org, whose data were used by permission here, was generously funded by Lilly Endowment Inc., under the direction of Christian Smith and Lisa Pearce. Data were downloaded from the Association of Religion Data Archives, www.TheARDA.com.
← Living in God's Time: Advent at Camp Summer is Coming! →