The Gospel without Gunpowder 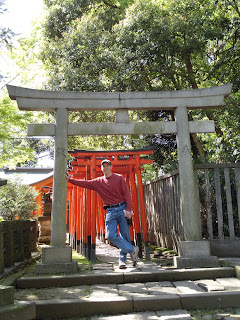 Last week, I had the privilege of traveling to Tokyo, Japan with my wife. Besides celebrating our 10th anniversary, the occasion for our trip was my college roommate’s marriage to a wonderful Japanese girl. My roommate traveled to Japan in 2005 with the Young Adults in Global Mission program of the ELCA. I expected him to return to the good old USA in a year or two, but he decided to stay in Tokyo to teach English. After a while, I figured it had to be about a girl, so I was not surprised when the wedding announcement came.
Neither my wife nor I had been to Japan before. Because of our gracious hosts, we enjoyed a great tour of the area and some amazing food, including raw fish, sake, and some excellent noodles. The cleanliness of Tokyo (there was no garbage anywhere!) puts our American cities to shame, and we noticed bicycles everywhere, most of them unlocked. I discovered that robbery is about 200 times more likely per capita in the United States than in Japan (that’s 20,000%). Honor and respect are important themes in Japanese culture. There were also green spaces everywhere in Tokyo with beautiful streams and tall trees. These green spaces were almost always surrounding a Buddhist temple or a Shinto shrine. Somewhere between 80 and 90 percent of the population practices one of these religions.
Christianity, it turns out, is less common. About one percent of the population (around 1.5 million people) is Christian, and between 20 and 30 thousand are Lutheran. Christianity has a complicated history in Japan that includes 200 years of heavy persecution and some notorious cases of mass crucifixion in the 17th century. In Japan, Christianity is inextricably linked to Western influence. Being Christian is, in many ways, counter-cultural. We can preach counter-cultural Christianity in an American culture of waste, crime, and general suspicion of the other. In Japan, however, being counter-cultural kind of loses its luster. I like a culture that has deep respect for family, has a strong connection to nature in the midst of the largest city on earth, takes pride in keeping things looking nice, and welcomes the stranger in open hospitality. Christianity in this culture should look beautiful. But what about Western Christianity? When the Jesuits came in the 16th century, they brought Christianity and gunpowder. Historically, it is difficult to separate Christian mission from Western imperialism and colonialism.
We joined the 50 or so regular worshippers at my friend’s Lutheran congregation on Sunday morning. Worship reminded me of services at my childhood church in the 1980’s. The only difference was that everything was in Japanese. Otherwise, I knew when we were on the Kyrie, prayer of the day, creed, and everything else. The hymns were all European-style, complete with organ. They even had coffee time after the service! I was hoping for more of a cultural experience in worship, and I found myself wondering if the Western bias could be separated from Christianity in Japan. Christianity seems to thrive in the U.S., with a murder rate 8 times that of Japan. Can our missionaries leave the gunpowder behind?
What does mission look like in Japan, which is the world’s 3rd largest economy? They do not need our hunger meal packages or our health kits. Maybe our Japanese brothers and sisters can help us. Maybe a culture that overflows with respect and cooperation can bring us a Christianity without gunpowder.
As I marveled at the European style service in Japanese and wondered if Christianity could ever be separated from Western influence, I looked up as the pastor raised a cup and spoke. I heard neither Japanese nor English but rather the words of Christ. I gathered with my brothers and sisters at the rail, and despite language and cultural differences, we shared in Christ’s body and blood. Mission is about accompaniment and mutual sharing. American Christians have a lot to learn from the people of Japan. As we build relationships and share in fellowship, Christ is present.
← No More Hurting People The Importance of God's Creation in Faith Formation at Camp →