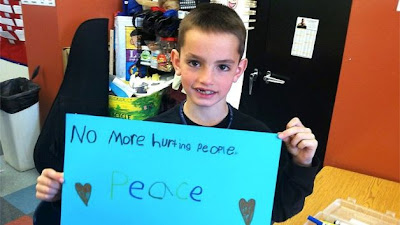 I watched in horror with the rest of the country. The Boston Marathon bombing touched me as an American, a runner, a father, and a man of faith. I wore one of my race shirts on Tuesday in support of the runners. That was the day that Martin’s picture was released all over the news media. Martin Richards is the 8 year-old boy who was killed in the bombing. The picture I saw shows him holding a sign that reads, “No more hurting people.” As a father of an 8 year-old boy, the image hit me emotionally and viscerally. The plea written in his own hand a few months before his brutal killing seems simple. It is so obvious to an 8 year-old what the solution is to violence: stop hurting people! I contemplated his words as I sought to sort out my feelings. Part of me wanted swift vengeance. I knew that American law enforcement would find the culprit and bring him to justice. Another part of me demanded that I look at young Martin’s sign: no more hurting people.

Like so many others, I followed the police chase in real-time as the FBI identified the bombing suspects, confronted them in a shootout late Thursday evening, closed down the city of Boston on Friday, and finally confronted the surviving suspect on Friday evening. As the flashing lights covered my TV screen and the scattered reports of a boat, blood, and shots fired coalesced into a narrative, I was sure that they had killed him. I remember being grateful. The ordeal was over. People did not have to fear these terrorists anymore. They were dead. Then came the news conference, and I discovered that one of the bombers was still alive. The media showed his picture. They showed some of his family and friends.

Dzhokhar Tsarnaev is his name. He grew up in America, graduated from high school, and was attending college. He is 19 years old. In my years at camp, I have worked with a lot of 19 year-olds. Somehow, when I saw his face and heard his name, little Martin’s sign came back into my mind: “No more hurting people.” I can no longer think of him as “the suspect” or “the bomber.” His name is Dzhokhar, and he is a young man with friends and family who love him and are trying to make sense of his senseless act of violence. Nothing can justify his act of terror or bring back little Martin and the others he killed. Is it wrong of me to humanize a terrorist like Dzhokhar, who by all accounts should be labeled a monster? I wonder what Jesus would ask of me. I think of Dzhokhar and cannot help seeing a human being, a flawed and broken human being lost in the wilderness. He deserves to die, and Martin deserved to live. It seems so simple. But it’s not. It’s complicated. As I try to sort out my feelings, my rage at the bombings cannot get past Martin’s sign: no more hurting people.

← The Seed The Gospel without Gunpowder →